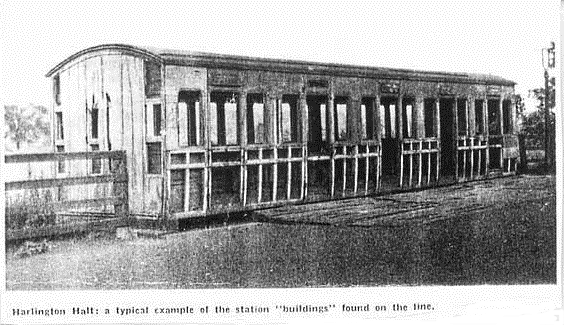 Did you know that Harlington once had its own railway station? Well, it certainly did! Perhaps 'station' is slightly too grand a word, but it was the place where trains stopped to pick up passengers.

Harlington Halt was situated at the top of what is now Crane Moor Close.

The line was known as the Dearne Valley Railway. Before 1923, it was operated by its parent company, the Lancashire and Yorkshire Railway. From 1923 until 1945, the line belonged to the L.M.S., and then British Railways took over.

Each village along the route was equipped with a 'halt' which consisted of a cinder track with a wooden board at the rail edge and an old, dilapidated railway carriage for a shelter

The line was just over twenty miles long and to travel from Wakefield to Edlington took one hour. The cost of a cheap day return for the total run was 4s.2d. (21p). From Harlington to Wakefield took 46 minutes.

The passenger service began on 3rd June 1912 and was withdrawn on 9th August 1951, due mainly to improved travel by road.

The line did remain open for some time after that for freight traffic, serving the collieries along the route.  As late as 1954, special day trips were run, twice a year, to the seaside.

If you know when the seaside trips ended or when the line was finally closed or indeed anything at all about our own little railway line, please let us know