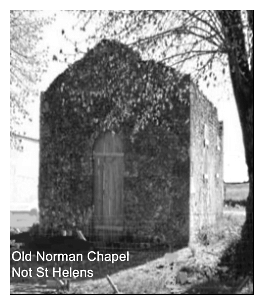 The ruins of St. Ellen's Chapel lie in St. Ellen's field, the most easterly of the open fields in the village.

They are preserved in a copse a few yards away from a dried up well.

It is believed that  the Chapel was dedicated to Ellen, the Celtic goddess of armies and roads and was later re-dedicated by the early Christians to Helen, the mother of the Emperor Constantine.

This is an ancient site. Please respect it. Do not remove anything. Do not dump your rubbish there. The site is reputed to be haunted by a ghost of a white lady who walks from Barnburgh Hall to the Chapel, so go there at your peril!

The following information has been taken from the

"The site of the Chapel of St. Helen's is to be found about a quarter of a mile along the lane  that takes its name. It stands in an enclosure a few yards inside a field on the East side of the lane.

I have heard it said that was the site of a "lost" village, but I have encountered no evidence either in Doomsday Book or in later records, of such a village, and I think the story must have become confused with the colony of Ancient Britons which settled on Barnburgh Common, where, as I have mentioned earlier, three round barrows once existed.

On the other hand it is a fact that in comparatively recent times farmers cultivating the fields adjacent to St. Helen's have on a number of occasions, damaged ploughshares against large stones, and on more than one occasion human bones have been brought to light. Whether the stones were remnants of a once existing hamlet, or just stone from the ruins of the Chapel cannot be said with certainty

Roger Dodsworth, the famous antiquary visited the place on August 18th, 1620, and writes

"There was a Chapel dedicated to St.Ellen. The walls are now standing in the South Field a quarter of a myle from the Church"

He goes on to record that there were several tombs amongst the ruins containing the arms of several notable families, including Zouch, Latimer, Percy, Wake, Clifford. Mowbray and Warrenne He also noticed the arms of Edward, John and Edmund, the three sons of King Edward III

Before the enclosure of the Commons, the Chapel stood in the middle of South Field which was part of Barnburgh Common Lands, and when Barnburgh came under the Enclosure Act in 1820, the Rev. Henry Watkins, who was Rector at that time, had the site enclosed and planted with trees.

The site is still enclosed, and during the autumn of 1948 it was partially excavated under the supervision of Mr. Norman Smedley, of Doncaster Art Gallery, and Canon C. E. Whiting, Vicar of Hickleton.

TThis work exposed what is remaining of the walls about 2 to 3 feet high and mostly about 3 feet thick. The size of the Chapel was established at about 46 ft. 6 ins. by 23 ft

Two doorways were brought to light, one on the North, which appears to have been the main entrance during the later years the Chapel was in use, and one on the West which was found to be closed off at the base by a reversed cornice. There is no sign of a South doorway and this is most unusual as in most of the earlier churches, doors and windows on the North side were avoided for the sake of warmth

One of the most interesting discoveries of the excavation was a carved Cornice Piece of the Perpendicular period (15th century). Another "find" was a stone which had been hollowed out in the centre and may have been a holy water stoop.

Among the other discoveries were odd pieces of glass (probably window glass), roofing tiles of shale limestone, a clasp (probably a book clasp), pieces of a human skull, and a penny of Henry IV of about 1412 or 1413

Now these were the result of exposing the outside walls only about a foot on either side and a total excavation of the interior, which so far is almost untouched, will, I am sure, bring to light far more interesting relics, such as the tombs mentioned by Dodsworth. I hope to be in a position to organise this work in the near future

A careful examination of the plan and the remaining fabric of the Chapel shows it to be of the mid-Norman period (early twelfth century) although there are inscribed and decorated stones of later date. This feature is quite typical as in almost all churches larger windows and more decorative work were added as the ritual became more elaborate

A curious thing about St. Helen's is that until recent times whenever there was an alteration in the Prayer Book or any other matter necessitating a communication from the Privy Council, two copies were received, one addressed to the Incumbent of St. Peter's and one to the Priest in Charge of St. Helen's. And this, in spite of the fact that the latter has been in ruins for centuries. Can it be that they do not yet know that St. Helen's no longer exists as a church!"

Close to the site is St. Helen's Spring which was at one time reputed to have valuable medicinal properties and was very much used in the olden days

St. Helen's Well (Barnburgh) Sacred Well     At coordinate SE 4959 0342 near the town of Barnburgh, the waters of this well were "at one time reputed to have valuable medicinal properties," wrote the historian J.S. Large (1952) and, by its side, a chapel was built dedicated to the saint�the remains of which are still visible. It was first described in deeds from 1684, where it was called 'Senttellin Field,' and was next shown on the Greenwood Map of 1771 as 'St. Helen's Well.' Later references of the place in 1840 Tithe Awards show it as St. Helen's Spring. The chapel by its side "was already in ruins in 1620," said A.H. Smith (1961-63), showing once more that this spot had a truly ancient pedigree.

Field notes from the Modern Antiquarian

Field walking and resistively surveys of the area around the Mediaeval St Helen's Chapel near Barnburgh in South Yorkshire have possibly posed more questions than they have answered. Resistively surveys have shown that the chapel was once enclosed in a bank of unknown antiquity. However, field walkers have found a number of pieces of Mediaeval and Roman pottery scattered around the chapel which lies next to a Roman road. Interestingly, some 34 fragments of worked flint were found scattered in the area, about half of which were in the location of the neglected St Helen's Well, the water from which was renowned for it's medicinal properties.

The evidence points to a healing well site with a long and seemingly continuous history of activity, from prehistory through the Roman era to Mediaeval times. It would thus appear that this site held some particular significance even before the Church sanctified the area. The question is, was the water from this well considered to have healing properties before the Church Christianised the site? Or did the association appear after the church was built?