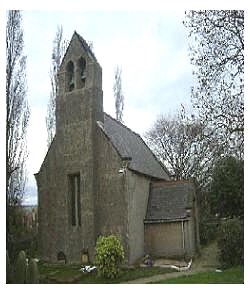 The church is Norman, consisting of Chancel, Nave and Bellcote.  The Bellcote appears to be Norman making it a very rare example in Britain.  The South door is also Norman.

The church owned an Elizabethan Chalice (1579) but this was removed to Wath-Upon-Dearne Parish Church for safe-keeping.

There is a reference to the church in the Charters of the monastery of St. John at Pontefract, written in 1090 AD. They mention an Ulfus, Priest and Parson of Adwick who was a witness to a gift of land to the monastery.

The pulpit has a star and stripe on the shield of the Washington family who are said to have been linked with America's first president. The chancel arch was replaced in 1910 by A. C. Martin of London.

The church is recorded in Joseph Hunters 'History of The Deanery of Doncaster' as;

"The Church of Adwick is the purest specimen remaining in this deanery of the original village church. It has no tower, no side aisles, but simply a nave and a chancel, with a little shed in which two bells are hung. The simplicity of the structure and the narrow lancet-shaped windows show it to be the original fabric erected in the time of Swein"